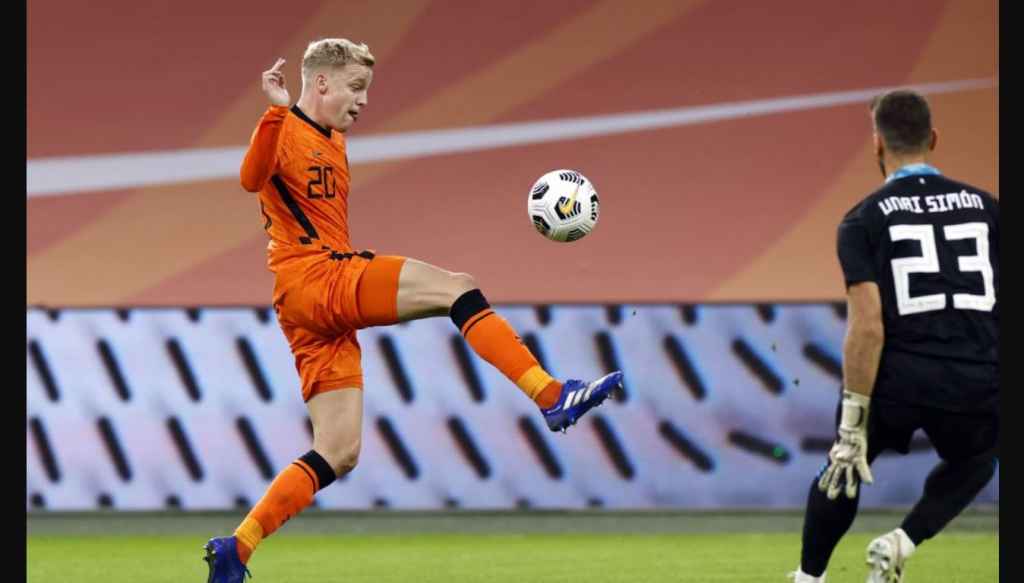 Crazy Ball – Donny van de Beek did not bother being ignored by Manchester United, scoring a beautiful goal while defending the Oranje in the Netherlands vs Spain match last night at the Johan Cruijff Arena in Amsterdam.

The Netherlands vs Spain friendly match on Thursday (12/11) ended with a score of 1-1, but the focus of media attention was on the figure of Manchester United player Donny van de Beek who scored a beautiful goal early in the second half of the match. The Dutch player has rarely been played by Ole Gunnar Solsjaer for some time, and even if he is only played for a few minutes.

During a period that Solskjaer rarely played at Old Trafford, Donny van de Beek has scored two goals for the Dutch national team, each against Italy on October 14, 2020 in the UEFA Nations League and last night in the friendly match between Netherlands vs Spain in Amsterdam.

The second half had just begun 45 seconds when an Oranje jammed attack on the right caused the circular man to divert to the left flank. A long ball is sent into the box, failing to hit the target man wanted but the ball throws up the 23-year-old's runner who snatches a volley past keeper Unai Simon. Score 1-1!

No more goals after that with the results of the match between the Netherlands vs Spain ended with the score 1-1, which will kick off Frank de Boer's squad's next two matches against Bosnia Herzegovina and Poland in the UEFA Nations League.

Van de Beek last played the full 90 minutes for Manchester United in the Carabao Cup match at home to Brighton which ended with a 0-3 win. The Dutch player recorded one assist. Since then the former Ajax man has rarely played in full: